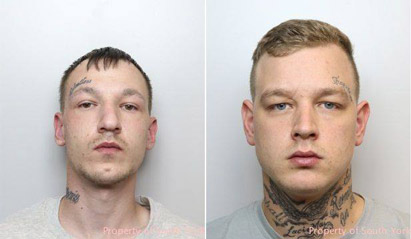 A 26-YEAR-OLD Barnsley man has been jailed for 10 years for the manslaughter of Richard Broughton - who was deliberately run over in Elsecar last year.

He was also disqualified from driving for seven years.

The court heard how in April last year, police were flagged down by members of the public on Welland Crescent, Elsecar, and were taken to Mr Broughton who was lying critically injured in the road.

Mr Broughton had been run over by a white Suzuki Swift, which had fled the scene.

Mr Broughton was taken to hospital with multiple severe injuries, where he remained in a critical condition before his death.

A post-mortem concluded that he had died as a result of multiple injuries consistent with being run over.

The car used was later found on Shaftesbury Avenue.

Senior Investigating Officer Detective Chief Inspector David Stopford said: “Forensic analysis revealed blood on the underneath of the vehicle and signs of damage. The blood we recovered was DNA-matched to our victim.

“This evidence, along with CCTV footage of the incident, demonstrated that Thompson used that car as a weapon to harm Mr Broughton that evening and made no attempt to stop afterwards.

“Our investigation uncovered a number of prior incidents that night between our victim, Jones, Thompson and others, clearly suggesting they were in some kind of dispute.

“That, however, is no excuse for the dangerous and ultimately fatal actions Thompson took in April."

A second man, Thompson's brother Jon Paul Jones, 24, of Welland Crescent, Elsecar, entered guilty pleas at an earlier hearing and was sentenced to 18 months in prison for affray and 18 months for witness intimidation, to run consecutively – totalling three years in prison.

DCI Stopford added: “I am pleased that Thompson has accepted responsibility for his role in Mr Broughton’s death, and that Jones pleaded guilty to his crimes that night."