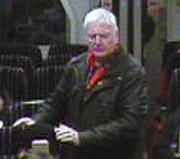 TRANSPORT police are hunting for a man wanted in connection with a sexual assault after a woman on a train at Barnsley Interchange was groped while she slept.

The victim, a 35-year-old woman, was asleep on the train from Leeds to Barnsley at around 6.12pm on December 20.

As the train arrived in town, a man leaned over to her and touched her inappropriately and kissed her.

Officers would like to speak to the man shown in the CCTV image as he may have information which could help the investigation.