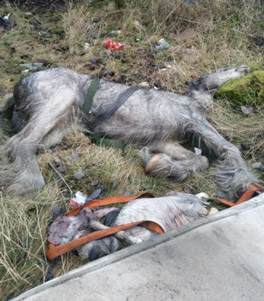 THE CARCASSES of a horse and her foal have been found amongst flytipping in Barnsley.

Parish Councillor Kevin Osborne discovered the remains in a layby off of Hollygrove Roundabout on the edge of Goldthorpe - athough it's believed they were first discovered yesterday.

The carcasses were found amongst a dumped mattress and other rubbish.

Barnsley Council has confirmed it is dealing with the incident.