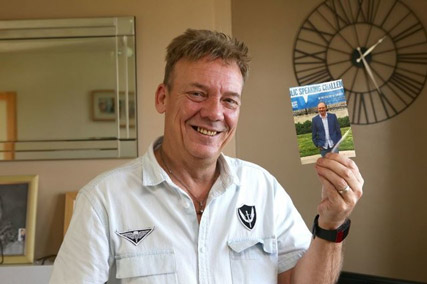 A BARNSLEY man who has suffered with a stammer for most of his life captured the hearts of the nation after he took part in an intensive speech therapy course as part of a new TV show.

Lorry driver Tony Robinson, 54, from Worsbrough Common, has suffered from a chronic stutter since he was six years old. He wouldn’t use the telephone it was so severe.

But thanks to the McGuire Programme, the same course which helped popstar Gareth Gates conquer his speech impediment, Tony can now order drinks at the bar and speak to people over the phone.

He was chosen by ITV to go on the all-expenses-paid, four day course in London, as part of new show School for Stammerers.

He then appeared on ITV's This Morning yesterday (Tuesday January 9) where he was questioned by hosts Holly Willoughby and Philip Schofield about his stammer and his experience on the programme.

But he surprised viewers when he delivered his wedding speech to his wife Paula - something he hadn't been able to do on their wedding day.

The move was met with praise on social media, with users quick to brave Tony's bravery, with one commenting:

"Crying my eyes out and so happy Tony did so well. My son has stammer and know it can be so hard. Well done Tony. What a star."

Another said: "OMG Tony just doing his wedding speech @thismorning bought a tear to my eye. So lovely to see! Well done him!"

Tony said: “It was a four day course and we crammed 56 hours of intensive speech therapy in.

“I was given the task of walking around London and introducing myself to 100 people in two hours. And then I had to stand up in Trafalgar Square on a soap box and do a speech. It was scary, but I did it and my confidence is sky high now.

“I’ve tried speech therapy, acupuncture, spiritualism, hypnosis and then four days on this course, the change really was unbelievable.

“And the coaches ring me every day just to talk and make sure I’m keeping it up. Everyone of these coaches have all had a severe stammer of their own and when you hear them speaking, you think ‘wow’."

You can catch up on School of Stammerers on ITV player.