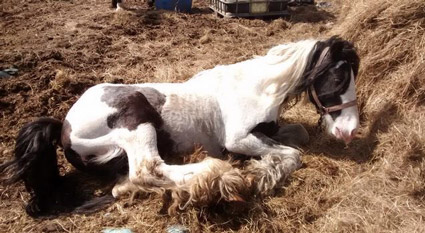 A BARNSLEY man who treated his horse's broken leg with Penicillin instead of getting vet treatment has been given a suspended prison sentence and banned from keeping equines for life.

Kevin Wilson, 55, of St Paul’s Parade appeared at Barnsley magistrates’ court last Thursday (December 7) where he pleaded guilty to four offences under the Animal Welfare Act relating to ten horses he kept at a Barnsley allotment.

The RSPCA attended Ballfield Lane Allotments in Darton in May this year after a call from the police.

RSPCA inspector Paula Clemence said: “One of the horses, a piebald cob stallion was down when we got there.

“His breathing was laboured and he was tethered in such a way that he couldn’t reach water. He also had overgrown hooves.

“It turned out he had suffered a broken leg almost a week earlier and rather than seek veterinary attention for the horse’s clear lameness Wilson had been treating him with Penicillin.“

"Very sadly, he had to be put to sleep.

”Two further horses were suffering from overgrown hooves. All ten of the horses had inadequate grazing, water, shelter or bedding material and were living in faeces in an enclosure full of hazards.

"When the horses were walked to a transporter across an area containing green grass they were desperate to get to it and ate ravenously.

"Four of the ten horses were signed over to the RSPCA on the day and have since been rehomed but Wilson refused to sign over the other five who have been in RSPCA care since then, one of which was pregnant and has since had a foal.

"The horses were confiscated as part of the sentence passed on Thursday and it’s hoped new homes will now be able to be sought for them."