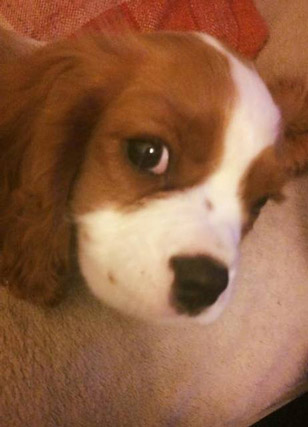 A PUPPY has died after ingesting poison while out on a walk in Honeywell, its owners believe.

Clegg the spaniel, who was just 16-weeks-old, died a matter of hours of ingesting the substance. Vets confirmed the cause of Clegg's death was ingesting poison.

Owner Bernadette Eaton says that she believes Clegg ate the poison in a clump of meat near while walking on a field adjacent to Harrington Drive, around the back of The Fleets.

Bernadette said: "This is happening too much. We had poisoning in Locke Park earlier in the year and other locations.

"I'm wondering how we could have prevented this. I've wondered if we should muzzle the dogs on walks, whether we should stay away from open land and stick to the pavement. I wish I could turn back the clock .

"I wish our Clegg was still here and safe. I never thought this could happen to us. We are vigilant and safety conscious with our boys. But it has happened and it only took a few seconds.

"I never want another dog to suffer like our Clegg did."