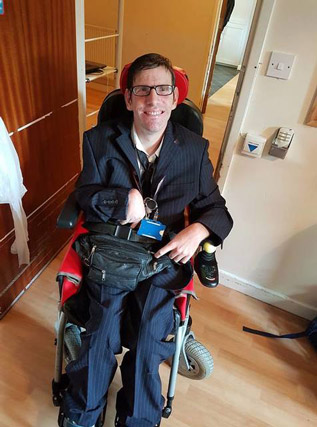 A CEREBRAL palsy sufferer who claims he has been hit by cars while crossing the road in his wheelchair has once again appealed to the council to install a pelican crossing near his home.

Mark Ravenhill - or Mark the Campaigner as he's now being known - has campaigned for a crossing to be put on Church Street, Carlton, for a number of years.

He says a crossing would be useful as he regularly misses his buses due to the route he has to take to get to his bus stop - and says he's also had accidents with traffic when eventually crossing the road.

However, his requests have repeatedly been knocked back by the council, which says there's nothing it can do to help Mark because the area fails to meet the criteria needed for the installation of a pelican crossing.

Mark said: "Every day it's a struggle around my home area as I use this road to get my daily buses.

"The pavements are so small and I have to go on a huge trail to get to my bus stop due to there not being any crossings for people like me around where I live.

"I regularly miss my bus due to this and have had many accidents with the traffic on the way. I was once crossing the road and a car clipped my wheelchair. Another second and he could have knocked me over, now I am nervous to cross the road alone.

"I have been campaigning for a crossing to be put in to place for people like me that need this.

"Despite my condition, I'm a very independent person and I like to go out on my own, which I find difficult to do without a safe place to cross.

"I don't think it's a lot to ask for but the council is rejecting all my requests."

Coun Roy Miller, Cabinet Spokesperson for Place, said: “We have been in regular contact with Mr Ravenhill over a number of years and have explored every avenue available to us.

"We fully understand Mr Ravenhill’s concerns, but have repeatedly explained to him and his representatives the reasons why we cannot accommodate the pelican crossing he wishes for.

"Even if the site met the national criteria in terms of traffic flow and pedestrian footfall - which it doesn’t - the constraints of the site in terms of the width of the road and the footpaths would make installation impossible.

"Also, research has demonstrated that low-usage crossings can be more dangerous than not having a crossing there at all, given that drivers get so used to the light being green that they effectively stop taking notice of the signals.

"We have installed a lot of works in response to Mr Ravenhill’s concerns, including dropped kerbs at every junction along the road to aid those with mobility issues, as well as additional signing to warn drivers that vulnerable people may be crossing the road.

"However, unless there are dramatic changes in the criteria governing crossing installations or in the amount of traffic and pedestrians along the road, we have no more options available to us.”

Mark will be holding a public meeting on November 1 at Carlton Park between 3pm-4pm to discuss the issue. The event is open for anyone to attend.