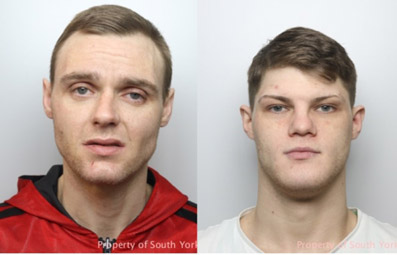 A LOCAL man has been jailed for life after being found guilty of the brutal murder of a Rotherham man.

Both were given life sentences with a minimum requirement of 30-years behind bars for Plant and 27-years for Fensome.

The body of 47-year-old Steven Fretwell was found lying underneath the windowsill in the bedroom of his ground floor flat in Kingswood Avenue, Laughton, on the afternoon of Sunday December 18.

Mr Fretwell was violently beaten and left with numerous broken bones and extensive lacerations following a sustained attack, thought to be motivated by robbery.

Detective Chief Inspector Steve Handley said: “When we found Mr Fretwell’s body, he was covered in horrific injuries and straight away it was clear he had been subjected to a senseless and incredibly violent attack, heard by neighbours and described to police as though someone was being tortured.

“Mr Fretwell was a vulnerable man, who could only walk short distances. These two men took advantage of that, carrying out an abhorrent attack on him, using extreme levels of violence.

“They gave no thought to the impact this would have on Mr Fretwell’s friends and family and on the local community and selfishly denied any involvement in his murder throughout the trial.

“I’m pleased that they have now both been found guilty of his murder and have been jailed for over 25 years each. Although we may never know who played exactly what role, what we can be clear of is that both are responsible for the death of Mr Fretwell.

“I hope that knowing they are now behind bars for a significant length of time offers some condolence to his friends and family.”