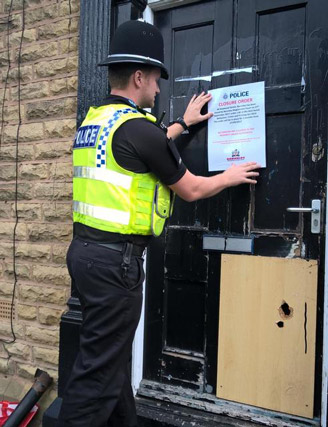 A PROBLEM house infamous for anti social behaviour and drug crimes has been closed by police - meaning anyone found trespassing there could face prosecution.

Council officers and police from Barnsley’s Safer Neighbourhood Service have 'closed' the house on Hopwood Street after a warrant executed at the property saw two people arrested on suspicion of possession with intent to supply Class A drugs.

Suspected Class A drugs were recovered from the address.

PC John Crawford worked alongside Barnsley Council to put together the closure order application. He said: “Residents have been reporting concerns to both police and council for months about suspected drug crimes and antisocial behaviour.

“We have acted upon those concerns and worked tirelessly alongside our partner agencies to bring this matter before a court and successfully close the property for a number of months.

“This property has been at the centre of local issues and it’s our hope that this closure order will have a really positive impact on the lives of the community.

“Those living in the property will be evicted and anyone caught trespassing on the property faces further legal action and possible prosecution."