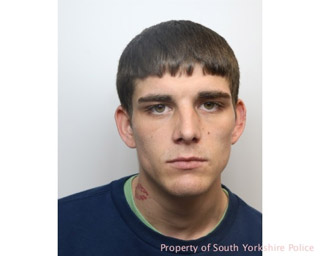 A DRUG driver who fled the scene of a crash he caused has been jailed for two-and-a-half years after admitting his role in the accident that left three teenagers with serious injuries.

He was jailed for two-and-a-half years, disqualified from driving for three years to start upon his release from prison and must sit an extended driving test.

The incident happened after midnight on January 6 this year, when a blue Peugeot 106 driven by Green was involved in a collision on Sandybridge Lane, Shafton, when it failed to negotiate a bend in the road and went down the embankment.

Green left the scene prior to emergency services arriving and was arrested a couple of days later.

PC Andy Brown from the Serious Collisions Unit said: “Green has accepted responsibility for his reckless and dangerous actions that night, which injured three teenage boys.

“Green chose to drive dangerously whilst under the influence of cannabis. By handing himself in to the police when he did he knew he would be under the limit regarding his drug use.

“Rather than remaining at the scene and helping his friends, he decided to show off to his friends on a freezing night rather than driving in a sensible manner appropriate to the conditions.

“One of the teens, a 17-year-old boy, suffered life-threatening injuries that have had a lasting impact. All three were released from hospital and are recovering well, but their lives were changed that night."