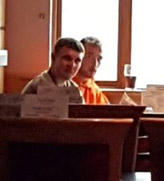 TWO men are wanted by police over a robbery at a house in Stairfoot in which a woman was held up with a knife and machete and had her purse, cash and car key stolen.

The incident happened at 7.35pm on Wednesday, June 14 at a house in Victoria Street, but detectives investigating the incident have only just released information along with CCTV images of two men they believe could hold vital information about the robbery.

One is white, in his late 20s, around 6ft tall, thin and had dark blond hair. He was wearing a black quilted jacket and dark bottoms.

The other was also white and in his late 20s but around 5ft 7ins tall and of a stocky build, with short, black hair. He was wearing a dark jacket with a sweatshirt underneath and dark bottoms.

Anyone with information should call South Yorkshire Police on 101 quoting incident 1071 of June 14 2017.