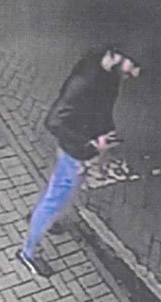 POLICE have released a CCTV image of a man they want to speak to after a racially aggravated assault in Wombwell in which a pensioner was kicked in the chest and face.

The incident happened around 11.35pm on Tuesday June 6 on High Street when the victim - a 69-year-old man - was approached by a man who then allegedly shouted racial abuse before assaulting him.

The victim was reportedly kicked in the chest and face, leaving him with serious facial injuries. He was taken to hospital and was discharged shortly after.

Detective Constable Jill Rankin, the investigating officer, said: “This appears to have been an unprovoked, nasty attack, which left the victim not only with serious facial injuries, but also extremely shaken and nervous about going out.

“Since the incident was reported we have carried out numerous enquiries including speaking to people who were in the area at the time, as well as extensive analysis of CCTV footage.

“I’d now like to ask for your help to identify the man in this image, as we believe he may have important information about what happened.

Anyone with information should quote incident number 1156 of June 6 2017.