Police appeal after hit and run 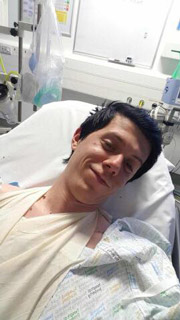 POLICE are appealing for witnesses following a hit and run in Lundwood where a local father's quick-thinking actions likely saved his son's life.

Aaron Lovitt has been hailed as a hero after the incident at around 4.30pm on Wednesday evening.

The 20-year-old had been pushing two-year-old son Leo in a pram on Pontefract Road when he was hit by the runaway van.

The silver van had been in a collision with a grey BMW further down the road behind Aaron and when he turned to look - it was careering towards them.

He managed to push his son out of the way and took the full impact of the hit. The van ended up on its side across part of the pavement, while Aaron landed in a hedge, breaking his collarbone and puncturing a lung.

A police spokeswoman added: "The driver of the Transit van made off from the scene.

"The driver of the BMW sustained minor injuries.

"Officers are currently investigating and any witnesses are asked to contact police on 101 quoting incident number 650 of August 9."