Drugs gang jailed for over 40 years 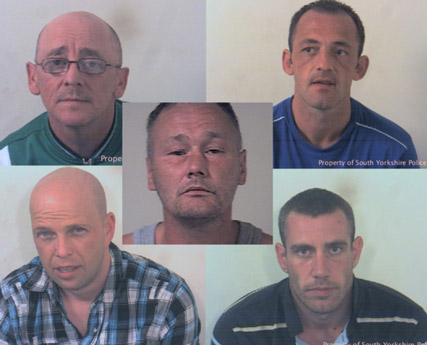 A BARNSLEY drugs gang who were observed by police as part of a covert operation and found to have made around £50,000 profit in just five months have been jailed for a combined total of over 40 years.

The gang, made up of two men from Royston, Andrew Evans of Park View and Richard Hatfield of Midland Road, Patrick Sweeney of Wood Lane, Carlton, Jamie Goose of Acre Road, Cudworth and Paul Mountain of Moorlands Crescent, Staincross, were observed by police for a number of months as part of the investigation and were found to have been dealing class A drugs to people across Barnsley.

The end of the covert investigation, dubbed Operation Bagshot, resulted in the men being jailed for a combined total of 43 years and six months for conspiracy to supply heroin and crack cocaine, following a 31 day trial at Sheffield Crown Court.

From June to October 2014, officers from Barnsley’s Organised Crime Team watched the men as they worked together to buy and sell drugs across Barnsley.

“They were also observed visiting rural areas of Barnsley where police recovered controlled drugs. They clearly thought they were running a sophisticated operation, but unbeknown to them we were tracking their every movement.

“After gathering an overwhelming amount of evidence, we able to put forward the gang had sold over a kilo of drugs in just five months, netting them a potential profit from criminal gains of around £50,000, which will now be subject to a separate investigation under the Proceeds of Crime Act."

The five were charged in May 2015, and all entered not guilty pleas. However, a jury found them guilty of all of the offences last Friday (July 21), and all five were jailed immediately.