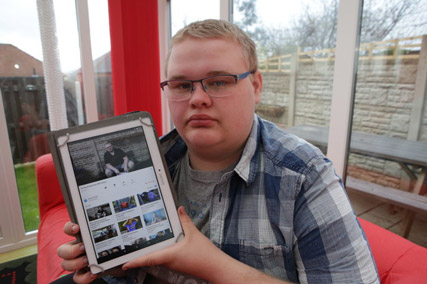 A BARNSLEY teenager battling anxiety and depression hopes he can help other young people having similar problems by sharing his experiences on his own YouTube channel.

Josh Adams, 16, left school last summer with just one GCSE in science, having missed most of his final and most important year of school due to anxiety and depression.

He was given another chance when he won a place at Barnsley College to study mechanical engineering, alongside studies to re-sit his maths and English GCSEs.

But after doing well for the first few weeks, he soon found himself unable to cope, and missed so much college that he was thrown off the course before Christmas.

"That really got me down again," said Josh. "I ended up having to go back to the service known as CAMHS (Child and Adolescent Mental Health Services) and basically it just got worse.

"I carried on going to CAMHS, and I'm on some medication, and I did start to feel better, and that's when I got to thinking about launching a YouTube channel."

Josh started the channel four months ago and has put together a catalogue of insightful videos - some of which talk about the difficulty he faced at school, while some just show him going about his day and how he manages to get through.

"I definitely feel like it's been a positive thing already," said Josh.

"What I'd really like to do is to help people, and to help educate people, and the ultimate goal would be to go around schools talking to young people who might be going through similar things to what I went through.

"In my opinion there isn't enough education going on to do with mental health issues in schools, and there are lots of people going through it, I know that.

"I wish I didn't, but I have got two-and-a-half years of experience of this, so I know I can help other people."