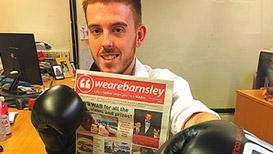 HE'S putting down the pen and picking up the gloves - We Are Barnsley's very own Danny Richardson is turning his hand to boxing in aid of Cancer Research UK.

Your WAB reporter, 24, has signed up for Ultra White Collar Boxing at the Metrodome on September 2, where he'll box in front of over 1,000 people at a black tie event.

Danny is deep into training for his fight, and has spent the last six weeks preparing at Wombwell's Combat Academy under the tutelage of local kickboxing world champions Mick and Tommy Crossland.

As the big night approaches, Danny is hoping he can raise as much money as possible for a worthy cause.

He said: "White Collar Boxing is something that I've always wanted to do. I'm a huge boxing fan - so I finally grew a pair and decided to sign up back in May. It's for a great cause; it's all about raising lots of money for a fantastic charity.

"Training has been hard but more than worth it. They've been great with us at the Combat Academy and I must be a bit crackers, cos I've decided that win, lose or draw, I'm gonna carry on training and do it again in December!

"I'm getting nervous now – I've got loads of people coming to watch and I don't wanna let anyone down. But whatever happens, as long as I raise loads of money for charity that's all that matters!”