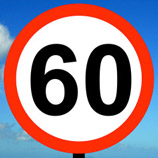 A 60MPH speed limit could be brought in on the M1 between Mansfield and Tankersley in an attempt to cut air pollution.

Highways England could introduce the new speed limit - a 10mph reduction - ahead of the M1 becoming a ‘smart’ motorway between junctions 28 and 31 in March, which could lead to an increase in traffic of up to 7.6 per cent as vehicles are allowed to drive on the hard shoulder.

It’s estimated that by spending £205million to make the M1 smart, an extra 5-10,000 vehicles could drive on the road, increasing the pollution caused by the 130,000 that currently use the motorway every day.

The 60mph limit, if implemented, is expected to affect drivers between 7-9am and 3-7pm.