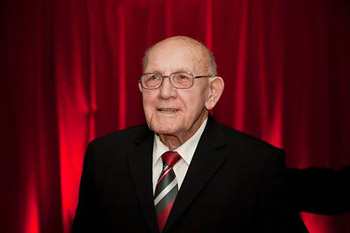 THE funeral arrangements for Barnsley legend Norman Rimmington have been announced.

Fans are invited to pay their respects to ‘Mr Barnsley’ as his funeral procession passes by Oakwell on Thursday, January 12.

Fans can show their appreciation to Rimmo as his funeral procession passes by Grove Street at approximately 2:15pm.

The funeral will take place at All Saints Church in Darton, followed by a ceremony at Barnsley Crematorium. A remembrance gathering will then be held at the home of Barnsley Football Club in the Legends Suite.

Due to the limited space available at all three venues, the family have kindly requested that the funeral service is reserved solely for family members, friends, former colleagues and teammates.

For fans wishing to pay their respects by laying flowers at Oakwell, an area has now been designated in front of the South Stand (to the left of the Reds Superstore) where they can be placed.

A book of condolence has now also been opened up in the Reds Superstore and fans are invited to sign it and leave messages of condolence.

Any of Norman’s friends, former colleagues and teammates requiring further information on the funeral arrangements should e-mail thereds@barnsleyfc.co.uk or telephone 01226 211 182.