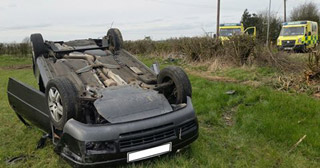 A MAN who overturned his car in a field in Barnsley has been disqualified from driving for 12 months for drug driving.

The 26-year-old crashed into a field along Tankersley Lane, Hoyland, in April.

Police later confirmed that he had taken cannabis.

The motorist pleaded guilty to the offences at Barnsley Magistrates' Court and was disqualified from driving for 12 months. He was also fined £160.