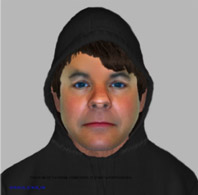 Do you recognise the man in this e-fit?

POLICE are asking if you recognise the man in this e-fit, who they would like to identify in connection with a suspicious incident in the Dodworth Road area of Barnsley.

At about 6pm on Saturday 13 August, a ten-year-old girl reported that two unknown men approached her in grassland near to Dodworth Road and Plumber Street.

One of the men is alleged to have grabbed the girl’s arm before she ran away. The girl was not injured during the incident.

Following initial enquiries, officers have now released an e-fit of one of the men.

The second man is described as aged between 36-40-years-old, of slim build with tanned skin and black hair. He is also said to have had a black plastic ear expander in one ear and was wearing a dark hooded top which had a white cord hanging from the hood.

He was also wearing white jeans with rips in the knee.Do