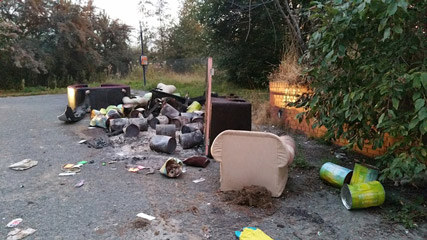 ANGRY locals have hit out at fly-tipping at Houghton Main.

Residents discovered a pile of a waste at the side of the Houghton Main miners' memorial yesterday evening (Thursday September 1).

It is one of a number of fly-tipping incidents to hit the borough in recent months.

MP Michael Dugher urged the council to do more to combat the issue last month.

He said: "Fly-tipping is an appalling and growing problem in Barnsley.

"Fly-tipping is not only an eyesore, spoiling our green spaces, but it can also cause real harm to public health and pose serious dangers to people and wild life in the Borough.

“I know how seriously Barnsley Council takes this issue and I am confident they will do everything in their power to combat fly-tipping in our Borough.

“With the new rules in place, the council now has another weapon in its armoury to tackle fly-tipping. Fixed penalty notices should be a strong deterrent and I hope they are used to punish offenders. I would also urge residents to report people."