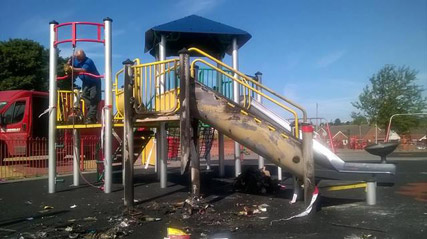 A CHILDREN'S play area in Kendray has suffered £8,000 worth of damage from a wheelie bin fire started by vandals.

Fire crews were called to Central Park in Kendray at around 1am this morning to put out a fire in the play area.

A council spokesperson said: "It appears that a wheelie bin was put under the climbing frame after being set on fire.

"We estimate the damage to cost around £8,000 to repair and replace. We've removed the damaged half of the climbing frame and will replace the rubber surface as soon as possible."