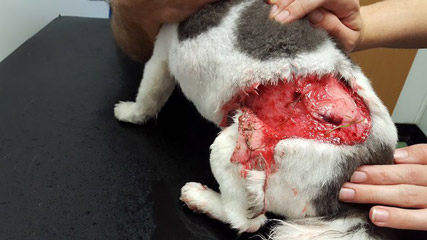 A LOCAL woman has issued a warning to dog walkers after her mum's pet chihauhau was mauled by another dog in Honeywell.

Rebecca Campbell-Guy says she was on a walk with her family and their pets around Fleets Lake when the other dog - thought to be a Pyrenees Mountain dog - attacked.

It mauled chihauhau Jez, as well as the family's other dogs, and the Rebecca claims that the owner - only known to her as Jack, made no attempt to restrain his pet.

The ordeal has cost Rebecca's mum, Kath, nearly £550 in vets' bills, with more on the way as Jez needs further treatment.

Rebecca said: "We have tried to contact the man but unfortunately he just blocks the number. My mum's little chihuahua has been badly harmed and was really lucky to survive the terrible ordeal.

"There can't be many people around the Honeywell area with such a distinctive dog as it was huge."

The dog warden has been informed and police are investigating.