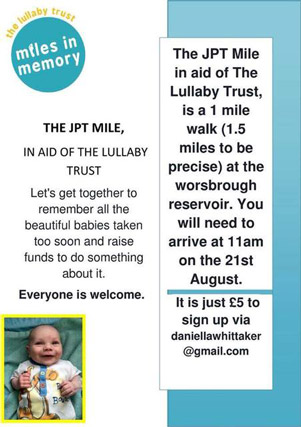 Charity walk in memory of baby

A CHARITY walk will be held next month in memory of a three-month old boy who died suddenly last year.

Daniella Whittaker has organised the walk in memory of her nephew Jayde Paul Thomas, who died in April 2015.

The JPT mile will take place at Worsbrough Reservoir on August 21, and will raise money for the Lullaby Trust, a charity that offers support to anyone bereaved through Sudden Infant Death Syndrome.

Daniella said: "Following the success of our Barnsley bake off, we are eager to follow the success with the JPT mile in aid of the Lullaby Trust.

"We are really grateful for all the support over the months."

Anyone who would like to take part should email Daniella on daniellawhittaker@gmail.com.