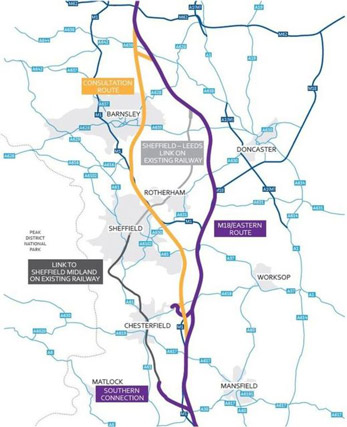 NEW PLANS for the controversial HS2 railway line suggest the route will no longer pass through Barnsley.

The HS2 is a planned high speed railway that will link London, Birmingham, the East Midlands, Leeds, Sheffield and Manchester.

The original plan (in orange) showed the line would pass through Hoyland Common, Ardsley, Lundwood, Shafton and Cudworth.

But a newly suggested route (in purple) indicates the nearest the line will come to Barnsley is east of Goldthorpe and Thurnscoe, with the route heading towards the M18 between Doncaster and Rotherham.

The company behind the plans, HS2 Limited, says the newly proposed route could save £1 billion - however, the final decision on the route lies with the Transport Secretary, Patrick McLoughlin.

He said: “We welcome the announcement of the new HS2 rail plans for the Sheffield City Region.

“This is a great opportunity for Barnsley. We’re seeing positive changes within the Sheffield City Region; employment and housing growth is thriving and Barnsley has a key part to play in this. The Northern Powerhouse Rail Network route will support our long-term plans to provide a thriving and vibrant economy, creating better conditions, infrastructure and stimulating the growth of more and better jobs and homes.

"It’s important to stress that we’ll be working closely with HS2 and the Department for Transport to develop how improved rail speeds and services will be achieved in linking up the major towns in the region, as well as the wider HS2 connectivity to London and other cities.

“We'll continue to work closely with partners in the region to consider the details of the newly proposed route, as well as actively supporting the development of the parkway station on the main HS2 line to Leeds, working on the benefits this will bring to Barnsley and Doncaster as well as the wider region.”