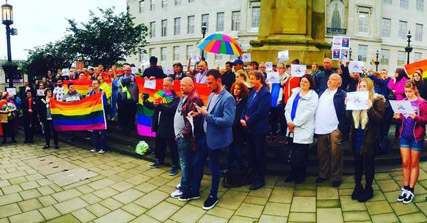 THE Barnsley community came out in force on Tuesday to pay tribute to those killed in the Orlando shootings.

Gunman Omar Mateen opened fire in the early hours of Sunday morning (June 12) at the Pulse nightclub in Florida, killing 49 before turning the gun on himself.

The attack also left 53 people injured. It is the deadliest mass shooting in recent US history.

Crowds - joined by the Mayor - gathered on the Town Hall steps to pay tribute to the victims, lighting candles and holding a minute's silence in tribute to those killed.

The vigil was organised by the Barnsley LGBT forum.