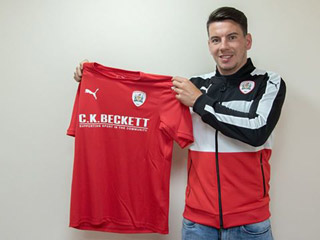 ADAM HAMMILL has signed a new contract at Barnsley.

The winger has signed a new two-year contract at Oakwell, that will see the 2015/16 Fans Player of the Season remain with Barnsley until the summer of 2018.

In his current spell at the club, Hammill has made 34 appearances for the Reds scoring nine goals, including in the Johnstone's Paint Trophy and League One play-off finals.