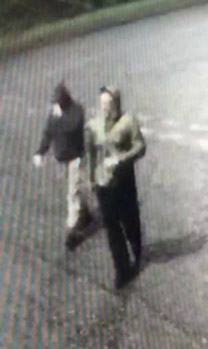 POLICE investigating connected arson attacks - including two on homes in Barnsley - have released CCTV images of men they would like to speak to.

Since October last year, police have received five reports of arson that appear to be linked to Richford Motors, a vehicle compound at Manvers, in Wath.

Two of these were in Athersley North, while one was in Parson Cross, Sheffield.

The most recent attack was reported on May 5, where the attackers set items on fire before throwing them into the company's yard, causing significant damage to a number of vehicles.

On May 26, the arsonists are understood to have approached the company in a silver VW Golf at around 2.30am - before they were disturbed and drove away from the scene.

Despite extensive enquiries, no arrests have been made.

Officers believe the two men pictured could hold vital information, but want to hear from anyone in who may have witnessed suspicious activity.

Anyone with further information should call 101 or email enquiries@southyorks.pnn.police.uk quoting incident number 48 of 26 May 2016