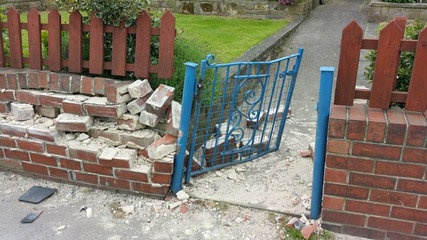 POLICE have issued an appeal after a van driver crashed into a pensioner's garden wall - before fleeing the scene.

Between 10pm yesterday evening and 6.30am today (Tuesday May 31) a van, believed to be a Renault, crashed into the garden wall of a house in Brampton Road, Wath.

The homeowners, an elderly couple, were not injured.

The van left the scene and enquiries are ongoing to trace the vehicle and its occupants.

Officers believe the van may also have sustained damage.

Anyone with further information should call PC 3824 Mcintyre at Rawmarsh on 101 or email enquiries@southyorks.pnn.police.uk quoting incident number 169 of 31 May 2016.