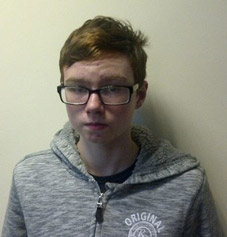 Have you seen missing Ethan Davies?

Ethan has now been found.

POLICE are searching for a missing 14-year-old boy from Barnsley.

Ethan Davies was last seen by family members at around 5pm today (Friday 6 May) in the Chequer Road area of Doncaster.

He was due to return to his home address in Barnsley but has not been seen or heard from since.

His family, along with officers, are becoming increasingly concerned about his whereabouts.

Ethan, who has gone missing several times previously, has a keen interest in trucks and transport.

He may currently be using the transport network in South Yorkshire.

He is described as around 5ft 6ins, of slim build with ginger hair and glasses.He was last seen wearing a black tracksuit top with stripes down the arms, a light green Eddie Stobbart T-shirt, a hi-visibility jacket and shorts. He was carrying a bright yellow bag.

Have you seen Ethan? Do you know where he could be?Anyone with information is asked to contact police on 101 quoting incident 815 of May 6 2016.