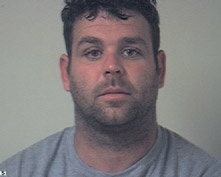 A BARNSLEY man has been sentenced to almost five years in prison after being convicted of killing a father-of-three during an unprovoked ‘single-punch’ attack.

Derbyshire was charged with manslaughter after Mr Bedford suffered a fatal injury during an unprovoked attack inside the Blue Room Bar in Barnsley in the early hours of November 2 2015.

Today (Friday, April 29), he was sentenced to four years and ten months behind bars.

Detective Chief Inspector Dave Stopford, the Senior Investigating Officer, said: “My thoughts are with Mr Bedford’s family who have lived through this nightmare and continue to live with this devastating tragedy.

“Derbyshire’s remorse and admission will not bring back Mr Bedford or take away the trauma, pain and suffering caused to his family.

“This was a clear cut case where Derbyshire approached his victim from behind with absolutely no provocation and delivered what turned out to be a fatal blow.

“He was violent, calculated and reckless and as a result now faces a much-deserved jail sentence.”

DCI Stopford said the case highlighted the need for people to seriously think about the “severe and life-changing” consequences of violent behaviour.

“On that night, Derbyshire threw a punch thinking that his victim would be hurt but would get up and walk out of the bar,” added DCI Stopford.

“He thought that it would just make him look like a big man but instead he has killed an innocent man.

“This is not the only case where a single punch has led to someone’s death and I want to reiterate the fact that with any form of violent behaviour, even a single punch, you run the risk of severe consequences.

“You risk taking a life, you risk time behind bars and you risk changing an innocent family’s life forever.”