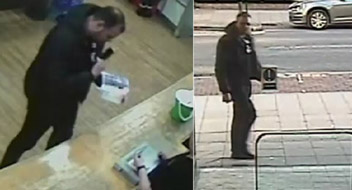 A CALLOUS THIEF stole a pensioner's purse at Morrisons in Barnsley.

Police are keen to speak with the man pictured in the above images after the incident, that took place between 4pm - 4.50pm on Wednesday 24 February.

The woman, who is in her 70s, noticed her purse was missing when she got to the checkout and realised that her bag was unzipped and her purse was gone.

On phoning the bank, she was told that one of her cards had been used to buy a number of high value items including a laptop and some computer software.

A second card that was stolen had not been used.

Anyone with further information should call 101 quoting incident number 800 of 24 February 2016.