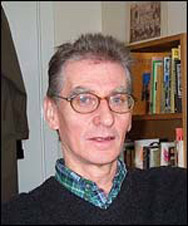 A Kestrel For A Knave author dies

BARNSLEY AUTHOR Barry Hines, whose novel A Kestrel For A Knave was adapted for the classic film Kes, has died, aged 76.

The sad news was broken this morning by Barnsley poet and radio presenter Ian McMillan on Twitter.

The news came almost a decade after the Hoyland Common born writer was diagnosed with Alzheimer's disease.

He is survived by his second wife Eleanor, whom he married in 2004, and by a son and a daughter of his first marriage.