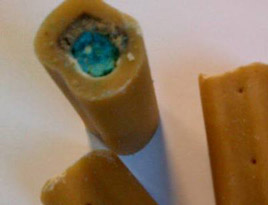 POLICE are urging dog owners to be vigilant after potentially poisonous dog chews were thrown over a garden fence.

The chews had blue pellets pushed inside them (pictured above) and officers believe that the pellets could be poisonous.

The homeowner has two dogs and at this time, it is not thought they have eaten any of the pellets, though they are being monitored closely.

Anyone with further information should call 101 quoting incident number 164 of 17 March 2016.