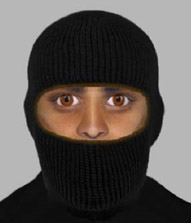 POLICE hunting a gun-wielding thief who struck in Hoyland have released an e-fit image.

At about 8.30pm on Saturday 27 February, it is believed that two men forced their way into a house in Eaden Crescent, where they threatened the occupants.

Officers are now looking to identify the man in the e-fit image, believed to be one of the offenders.

The man is described as Asian and was wearing a black balaclava.

The second man is described as white. The men stole a quantity of cash from the house before reportedly leaving the area in a light blue Vauxhall Insignia, or similar type car.

Anyone with further information should call 101 quoting incident number 1102 of 27 February 2016.