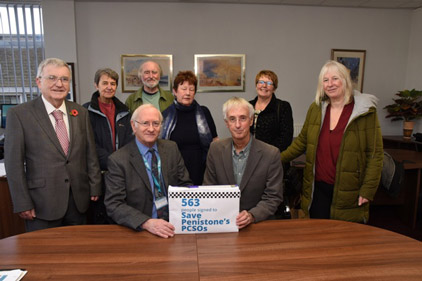 A PETITION that seeks to protect Penistone's policing team has been lodged with the crime commissioner.

Dr Alan Billings accepted the document which contains 562 signatures from locals concerned about the potential impact of further police cuts on the town.

Penistone based police officers were moved to Barnsley earlier this year.

Dr Alan Billings said: “As far as Penistone is concerned, the precise deployment of PCSOs is determined by a police working group that has been established within the district but has yet to report.

“At present it is looking at options and no decisions have been made. I recognise, however, that even in areas of relatively low crime, some visible police presence is reassuring.”