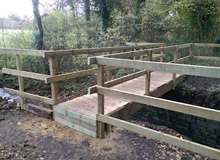 A SITE that was damaged in floods eight years ago has finally opened again, offering locals rare views of a historic artefact.

The Rockley Furnace site near the M1 at Worsbrough has an old pack horse stone arch bridge which was damaged in 2007.

Now, a temporary 18 foot timber bridge has been installed to allow public access for the first time in eight years

Coun Roy Miller said: “Unfortunately the damage to the structure of the bridge was beyond repair as all the lower abutments were washed away, and arches collapsed, with one hole going through to the bridge surface.

“This year English Heritage has finished carrying out detailed surveys of the bridge for their records and in October agreed to the remains of the bridge being removed and rebuilt to the proposed design.“