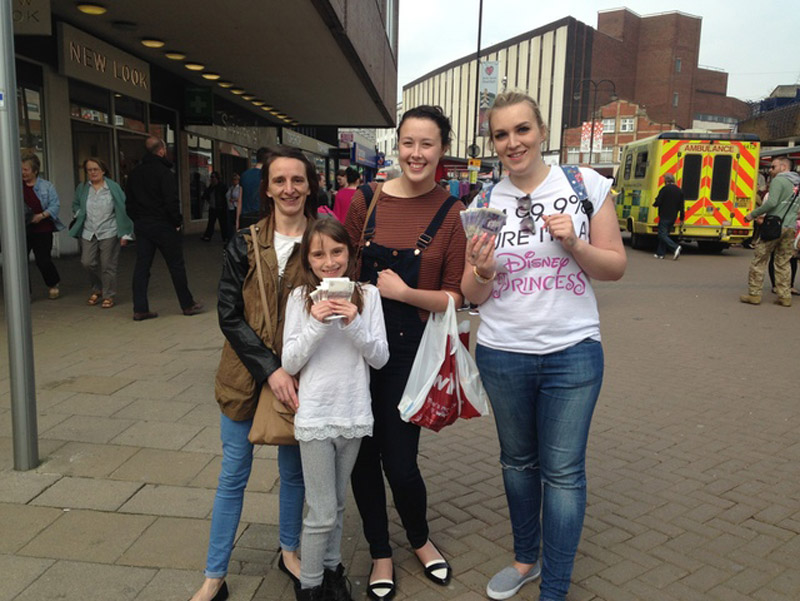 Obscure images of town centre locations were posted to both the go-kart firm and We Are Barnsley's Facebook pages from 10am, creating a two-hour frenzy of people searching for the treasure's location.

Monk Bretton's Danielle Wood, 25, tracked down the clues and came across fellow treasure hunters Robyn Hargreaves, 18, Michelle Richardson, 34, and her ten-year-old daughter Chantelle along the way.

The trio, from Hoyland, then joined forces with Danielle, pledging to split the money in two if they found the treasure's location.

Michelle said: "We had been shopping in the town centre but Robyn had noticed the posts on Facebook during the week, advertising what was going on. We missed out on the treasure hunt before Christmas so tried again.

"We kept an eye on the pages in the morning and just followed the clues. We're so happy we've won - I think we're going to save our share of the money and have a bank holiday treat in May."

Danielle added: "I'd heard about it and as I was on my way home from Leeds, I decided to walk through the town centre. The three girls asked me if I was the person from Tyke Racing and then we decided to join forces.

"My partner, Paul, has his 27th birthday soon so I'll be able to put the money towards something nice!"