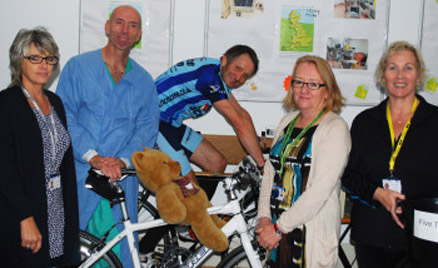 A TEAM from Barnsley Hospital have raised £1,700 having completed a 'virtual' cycle from Land's End to John O'Groats.

The anaesthetic team, lead by consultant Cris Swinhoe, started at 6am on September 12 and finished five days later on Friday 17 at 1.15pm.

They peddled an amazing 1,009 miles in a bid to raise funds for the hospital’s anaesthetic department.

Other fundraising activities included a tombola, a pop-up shop and a ‘name the bear’ competition.

Cris said: "The anaesthetic department undertook the ride because they wanted to make a contribution to the cost of new monitoring equipment.

"We enjoyed the cycle very much, because of the challenge, but also because it was a great team-building exercise.

"Those who took part and those who supported us deserve great praise for their commitment to Barnsley Hospital."