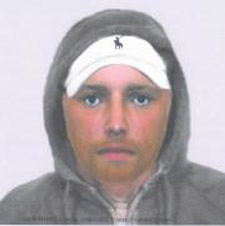 A MOTHER and her two children were threatened by men thought to be carrying guns who forced their way into the house and robbed them.

Police have released an e-fit image of a man who carried out the aggravated burglary at around 9.20pm on September 9, on Gypsy Lane, Wombwell.

A spokeman said: "The occupants of the house, a woman and two children, were allegedly threatened by the men who were thought to be carrying firearms.

"The men stole a quantity of cash and electrical items."

Officers have released the e-fit image of one of the men and descriptions of both suspects.

The first man is described as white, between 25 to 30-years-old with a wide set jaw with ginger/brown stubble. He was believed to have been around 5ft 7ins tall and of medium build.

He was described as wearing a white Ralph Lauren baseball cap, a dark grey hooded top with a light grey long sleeved t-shirt with black sleeves underneath. He was also wearing light grey jersey shorts and white LA Adidas trainers.

He is described as having a Sheffield/Doncaster accent.

The second man is described as also between 25 to 30-years-old, 6ft tall and of slim build.

He was believed to have been wearing a long green cargo style jacket which was pulled over his face. He was also wearing black trousers and blue Adidas Gazelle trainers.

He is believed to have spoken with a foreign accent.

Anyone with information is asked to contact South Yorkshire Police on 101 quoting incident number 1167 of September 9, 2014.