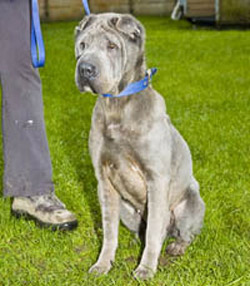 BLUE is one of those rare dogs that actually enjoys being bathed and groomed but unfortunately this hasn't been enough to help him find a permanent home.

The six-year-old Shar Pei was taken to the RSPCA's Barnsley and District branch more than eight months ago and has been in kennels ever since.

Vanessa Brennan, the branch administrator for the animal charity, said Blue came to them as his owner as she was no longer able to care for him.

"When he came in he had entropion on both eyes, which is where the eyelid rolls inward toward the eye, and he needed surgery," Vanessa added.

"He also had a bad skin condition which needed several rounds of treatment."

She said he is a very 'nosy and inquisitive' pooch, particularly when out and about.

"He is quite good on a lead and loves to go for a walk. He is also very sociable with other dogs but he hasn't had much experience with cats, so far.

"He would be better living with older children and is also probably one of the few dogs that actually enjoys being bathed and groomed.

"Blue just wants someone to give him the love and attention that he craves."

He is staying with the Chesterfield Animal Centre as the branch doesn't have a fosterer available in Barnsley at the moment.