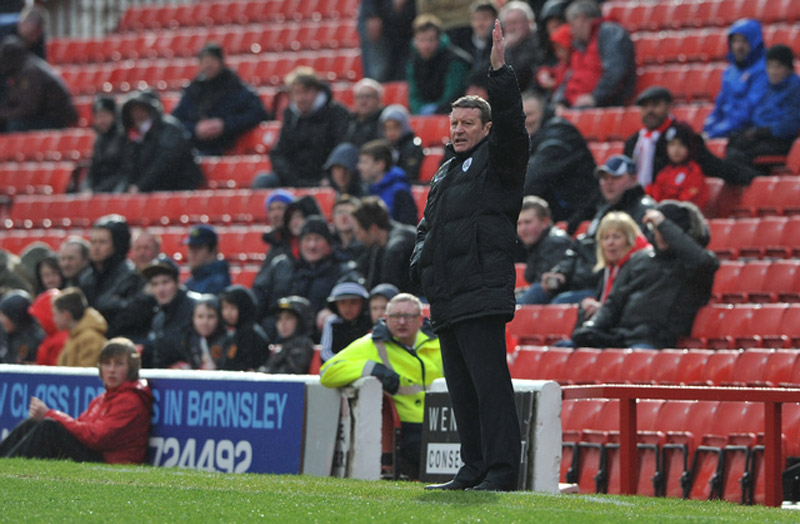 Ten-Men Reds Hold On For Point

BARNSLEY boss Danny Wilson felt his side would have gone on to beat Brighton on Saturday - if it wasn't for Kelvin Etuhu's 'shocking' dismissal.

The Reds, who went toe-to-toe with their promotion-chasing opponents, were inches away from breaking the deadlock through Ryan McLoughlin and Jean-Yves M'voto in the second half.

However, once in-form Etuhu was dismissed for his second bookable offence in the 77th minute, the Reds' hopes of victory diminished but they held on for a 0-0 draw.

That point and clean sheet hasn't harmed their survival prospects, despite wins for Millwall and Yeovil, but Wilson wasn't happy with referee Geoff Eltringham's big decision.

"The first booking was shocking, there was nothing wrong with it," Wilson said. "It was a shoulder charge. He comes away with the ball, he's too strong for the boy. He just eased him out of the way.

"It's not even a foul, let alone a booking. The second booking I'll accept. I think throughout the game there were lots of questionable decisions which I think everybody was confused about - not just our bench but theirs as well.

"Etuhu was outstanding again today and I felt with him on the pitch we would've gone on to win, but that was taken away from us."

Next up for the Reds is a home match against Premier League-bound Burnley on Saturday, before a crucial visit to Charlton on April 15.