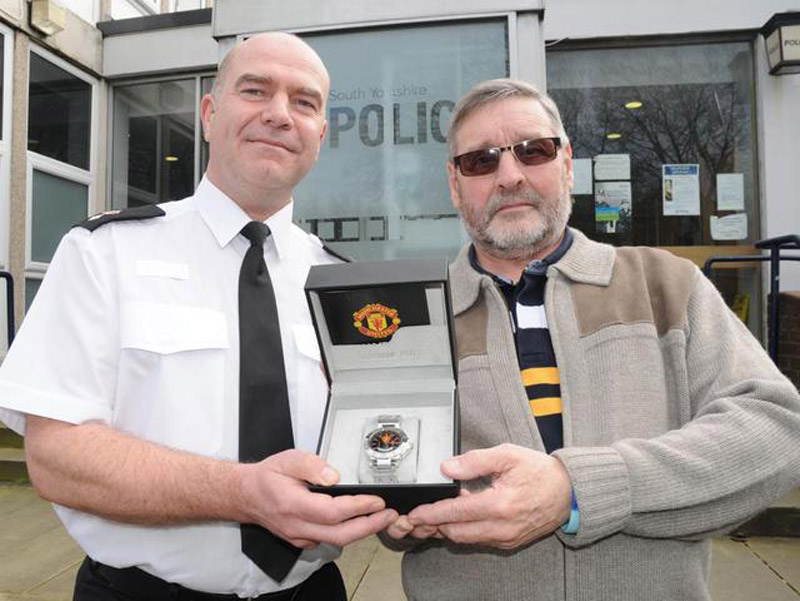 A BARNSLEY burglary victim who was left terrified after two masked raiders struck at his home just months after his wife's death was given a special surprise last week.

Chris Dutton, 63, had several items stolen during the incident on January 25. His wedding ring and a prized Manchester United watch - which was a present from his late wife - were stolen in the raid.

Despite extensive enquiries, police have been unable to trace the highly sentimental property.

But PC Louise Little, an officer in the case, brought a smile to Mr Dutton's face by sourcing the last of the limited edition watches, produced by Surrey-based Danbury Mint in 2011 to mark the club’s then record 19th league title.

The firm kindly donated the timepiece and it was presented to Mr Dutton by Barnsley's police chief Andy Brooke.

“I was really upset about the watch being taken because it was a part of me and my wife," Mr Dutton said. "I felt very excited about getting the new watch and think PC Little and South Yorkshire Police have done a lovely job."

The investigation is ongoing and any witnesses or anyone with information about the incident or property should contact South Yorkshire Police on 101 and quote incident number 104 of January 25, 2014, or ring Crimestoppers anonymously on 0800 555111.