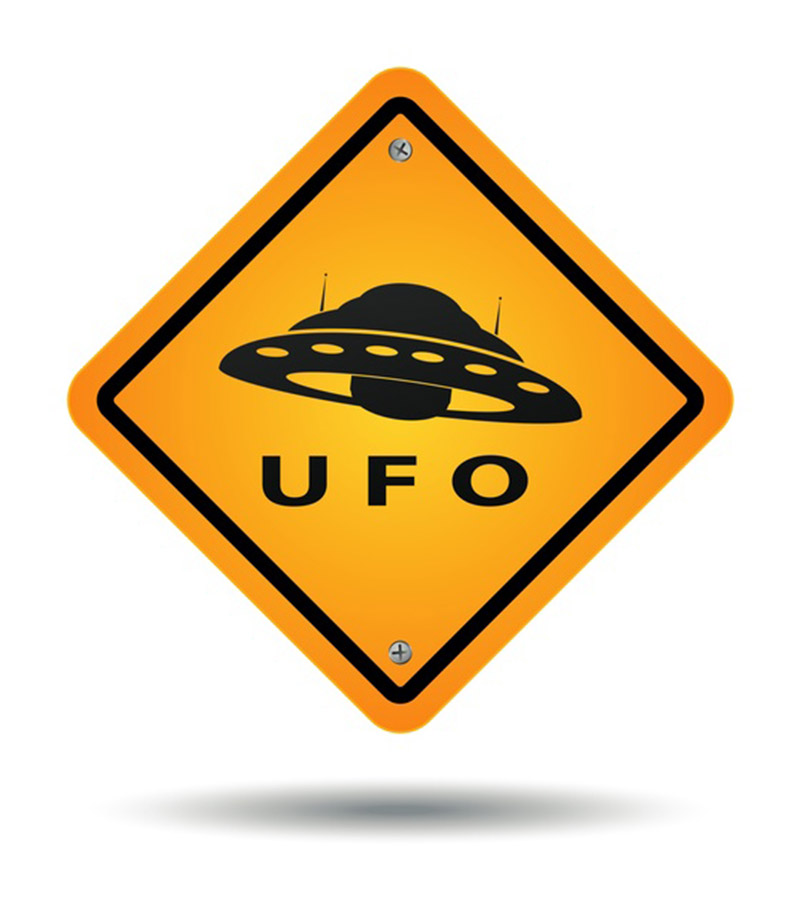 There's been a lot of debate on our Facebook page recently about UFO sightings. Here's the latest sightings that have been reported to website UK-UFO.co.uk.

Witness Statement: Just before I went to bed last night at 11.30pm I looked out of my landing window and saw a bright light in the distance. Obviously initially thought it was a plane or something. Looked out again about 10 minutes later, and it was still there in the same position. Because we have a nice view out of our landing window I keep a pair of small binoculars up there. I decided to look at this bright light through the binoc's and was amazed to see it was like a large circle of separate lights, then with a separate line of lights straight through the middle and slightly angled. I looked around the sky at the stars that were all normal. But then I saw another one of those round objects of lights, but this wasn't as bright but was probably further away. This wasn't moving either. This one was still there when I finally went to bed. The other one however started moving across the sky - much faster than the average plane, and disappeared out of sight very quickly. The one that moved appeared to have been over Mapplewell way, but was probably much much further away than that - maybe as far as Dewsbury (or further)? The other that was stationary was more like Wakefield or Featherstone (again, it could have been much further).

I looked online when I got to work this morning, but there appears to be no other mention.

I've always believed in things like this, but in my 32 years this is the first realistic thing i've seen of this kind.

Witness Statement: Around 11.30pm I saw a large ball of red light with an orange tinge travel across the sky. It crossed West to East at a very fast speed that no aircraft could achieve. It was below the clouds and had no trail. Maybe a meteor or maybe something else. I have seen a meteor before that broke up when it entered our atmosphere but this light was traveling at a very high speed horizontally across the sky which did not appear to be falling?

Witness Statement: I was looking over my balcony with a view over the town centre. Over the police station, when an almost invisible, large (relative to distance it was about the size of the gurkin tower in London) object flew across with a vector cloud infront. I was not on drugs or alcohol.

Witness Statement: I often stay up for most of the night, being quite the insomniac. From my bedroom window for the last week, at exactly 1am in the morning, every morning, I have witnessed this huge bright light in the sky. I am almost certain that this is not the space station. The light appears through cloudy nights and clear nights, regardless of conditions, it is there. Half way through the week I started seeing the second light to the upper left in the video that I have taken just now at 3am in the morning. I'd just like to say that these lights are absolutely without a single doubt in my mind, NOT lanterns, planes, weather balloons or anything of the sort, they stay in the same position all night long and they do not disappear until it gets too light to see them.

Witness Statement: Myself and Christine sat in our hot tub at night under a clear starry sky. We observed a very bright large star like light at approximately 10 to 15 thousand feet travelling slowly from east to west in the night sky. Standing up in the tub the object made no noise whatsoever. It looked like a four times sized Venus brilliant and consistent, no evidence of aeroplane navigation green and red lights and not flashing. Light passed directly overhead and remained consistent throughout that time.

Witness Statement: As I was driving to work I noticed what a appeared to be a small cylindrical silver ball up in the sky, the object was a fair distance away so appeared small, intially I thought it was a plane as it appeared very reflective. However there was no trail, and it was clearly a ball shape.

Witness Statement: I nipped outside for a smoke before bed. It's pretty dark in the garden area and not many street lights so a good view of the night sky. Just looking up at the stars and noticed two extra stars just to the left of mars (in view at the moment) they were moving slightly. The first one brighter than the other. I checked to see for flashing lights to indicate a plane maybe but nothing. As they contined to move straight on they seemed to dim ( maybe because of light reflected from the sun? ) I thought maybe they were satellites in view . I don't know if this counts for the site but I wondered if anyone else had seen it or could confirm what it was. Pretty amazing to watch though, what ever it was.

Witness Statement: Driving home from a trip to my parents heading down the Dearne Valley bypass towards Brampton.

Over to the left on my drivers side between the horizon and what I would call normal star level were three VERY large bright white lights. One bearing left and then two right one slightly above the other.

They were that bright and unusual that I stopped the car in the parking lay by and tried to take some photos but they were too distant on the Picture. Then I tried to take a video but as I started filming the one to left Started to slowly move away. Then the other two also moved slowly in the opposite direction till I could no longer see. It was a very unusual experience as they seemed too low and too large for stars. The sky conditions were quite a large moon and pretty clear sky with only sparse cloud.