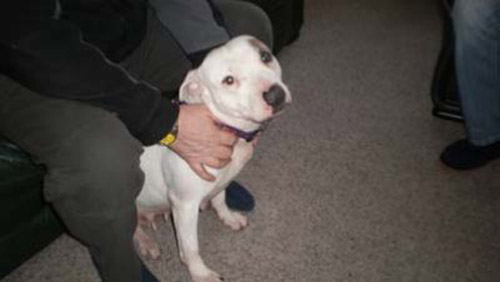 A STAFFORDSHIRE bull terrier who had been mistreated by her previous owners has found a happy new home!

The RSPCA's Vanessa Brenna said five-year-old Molly was one of two dogs rescued last April and taken to its Barnsley branch.

Inspectors were concerned for the pair's welfare as they were both being kept in very poor conditions and neglected by their owners.

Staff managed to find Molly a temporary home with a fosterer in December after her friend, Lola, was successfully rehomed.

However, good news came in on Tuesday afternoon that Molly had also found a new owner!

An RSPCA spokesperson said: "We're delighted to report that after eight months in RSPCA kennels, beautiful Molly has finally been rehomed.

"We would like to thank everyone involved in helping to find her new, loving owners. We wish them all the best for their exciting new life together."