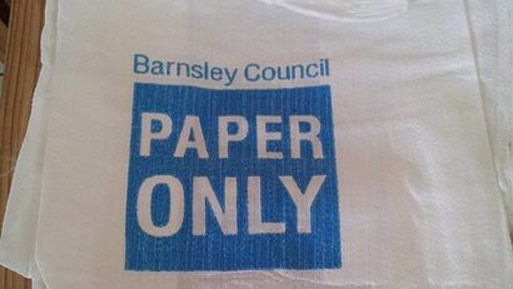 We asked you in a recent WAB Debate what you thought of the initiative - and it's made for quite interesting reading!

You can view that and add your thoughts by clicking here.

The white paper bag, as pictured, is an all-new scheme.

The council says it's a hard-wearing, hessian-like 55-litre bag for paper recycling, but many have claimed it'll simply blow away once it's been emptied.

Martin took to our WAB Debate and said: "It's a daft idea. It's tiny and the wind will blow the contents everywhere."

Another WABer said: "What a waste of money. I put the bag out for emptying before Christmas, as did most of the street. Guess what? It was a windy day and most ended up flying around the street."

AJ said: "I hate the new recycling scheme. The bag is awful and paper just ends up wet. I think this will reduce the amount of recycling, not increase it."

Gillian said: "There are eight houses on our street and the first time we put them out six of them blew away after emptying! What a waste of money."

The debate - which is still ongoing - has generated over 90 comments.

Readers urged WAB to get in touch with Barnsley Council to ask what they're planning on doing to stop bags blowing away.

A council spokesperson said: "Collection crews have been briefed to place the emptied white sack into the blue cardboard bin when presented at the same time.

"If a white sack is presented by itself, the crew will endeavour to replace the empty sack in such a way that minimises the risk of it blowing away.

"The sack has a 300g weight sewn into its base to help prevent it blowing away in other than severe weather conditions."