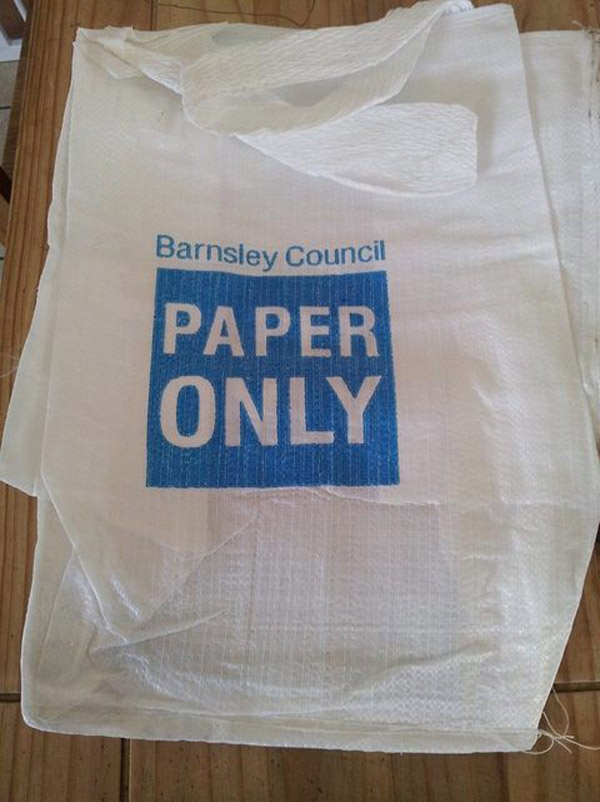 BARNSLEY Council's 'successful' trialling of its new recycling scheme will be rolled out to all households from March 1. Here's what you need to know.

Some residents have already received their all-new white sacks. It's a 55-litre, hessian-like bag which claims to be 'hard-wearing'.

However, a recent WAB Debate has seen residents criticise the scheme, saying the council simply aren't listening to residents' concerns.

You can read that by clicking here.

The council are sticking to fortnightly collections of grey bin waste, but other recycling collections are changing.

The way Barnsley residents have been recycling, and the feedback received, has shown that people want their garden waste collected all year round, not just in the summer.

In the past five years, paper collected at the kerbside in Barnsley has dropped considerably by 1,500 tonnes.

For glass, cans and plastics, only half the bins are being put out for emptying every time.

Therefore collections are being adapted to make better use of resources in light of the above findings.

This will see waste collected as follows throughout the summer:

One of the garden waste collections will stop during winter months (December to February) and be reinstated in March.

Actual dates will be confirmed on residents' leaflets.

To prevent mixing of different types of waste, the use of bins will also change from March 1.

Green bins: Garden waste only - fortnightly up to winter, then four-weekly

Cllr Roy Miller, cabinet spokesperson for development, environment and culture, said: "The people of Barnsley have been fantastic in the way they've taken to recycling.

"They've taken us to a rate of 46 per cent, which seemed an unthinkable target only a few years ago.

"The changes in these services will allow them to continue recycling with minimal impact.

"The changes may cause some confusion at first, but it won't take long to get used to them and we have staff on hand to help anyone that needs it."

The town's waste services have also reorganised its collection routes to improve efficiency and this will change the collection day for a large number of residents.

The leaflets contain full details of the changes in the service.

Residents should continue to present their waste and recycling bins as now until March 1.

The leaflet also contains a collection calendar which gives full details of the new collection dates.

Residents should take special care to read the collection calendar as their date may change when the new scheme begins.

You're invited to exchange your recycling bins for larger ones if you require the additional capacity to store four weeks' worth of recycling.

Residents waiting for delivery of bins will be permitted to place recycling in bags alongside their bins for collection.

What do you think? Necessary changes for the better? Have your say below.