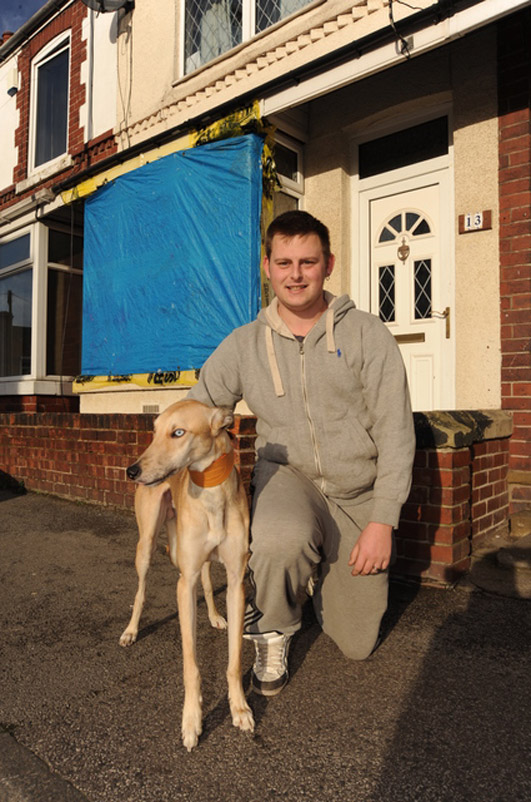 Couple Lucky To Be Alive After Puppy Causes Home Explosion

A COUPLE feel lucky to be alive after their pet dog inadvertently caused a huge explosion in their home.

Goldthorpe residents Matthew Heckler, 22, and Kerry Leach, 20, had left the rented house on Frederick Street just minutes before the front window was blown out onto the street.

Matthew's greyhound puppy, Zeus, is believed to have caused the explosion after biting into an aerosol can that reacted when the heating came on to cause the blast.

Matthew said: "We had only been out in the car ten minutes.

"We were going to Penistone and we were at Cortonwood when my phone started ringing with people saying my house was on fire.

"When I got back there wasn't much of a fire but the front window had gone.

"The dog had been rummaging around under the sofa and must have bit a can of deodorant that I got for Christmas and that's how it started.

"It's just what pups do and we aren't blaming him."

Matthew planned to sell the dog anyway but joked that he rushed through the sale following the explosion.

He added: "It's just another incentive to sell him with the trouble he's caused!

"It was nobody's fault really. It was just an accident that we thankfully managed to avoid."

Kerry said she felt a sense of relief when they got back home to find their three cats and three dogs all relatively unharmed.

She added: "We were selling the dog because he's a pup that needs a lot of attention and Matthew's looking to get full-time work.

"It was a real panic because everybody was telling us that our house was on fire. Only one person told us the window had actually gone.

"When we got back the dogs were fine. Two were with a neighbour and some lads had hold of another.

"I've booked a couple of days off work to sort it all out. Hopefully we'll have a new front window soon."