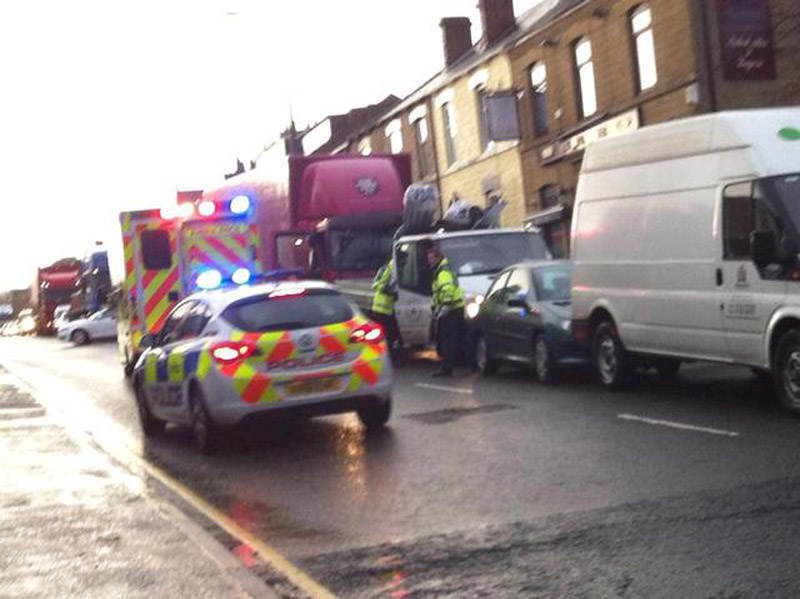 A LORRY driver had a lucky escape after a metal rod pierced his windscreen following a collision in Barnsley.

The driver crashed into the back of a flatbed truck which was carrying the rods, as he made his way to Armstrong's Beds on Summer Lane to make a delivery.

The impact pushed the flatbed into the car in front and the two cars in front of that were also shunted.

The Dodworth Road incident, which happened at about 3pm on January 7, was attended by several police cars and ambulances.

Six people were taken to Barnsley Hospital with minor injuries, including the lorry driver.

The road was completely closed until about 4pm, when the lane heading towards the motorway was re-opened.

Sgt Richard Wilson, who attended the scene, said six people from three of the vehicles were taken to hospital.

He said: "They're weren't seriously injured, but we took two people out using back straps just to make sure there were no serious injuries because they were complaining of back pain.

"It was a relatively minor road traffic collision but our policing colleagues are investigating.

"There are adverse weather conditions and heavy traffic conditions but all we can suggest at this stage is that we're looking to see if there's any blame."

John Armstrong, owner of Armstrong's Beds Centre, said he was contacted by The Shire Bed Company to say their driver had been involved in a crash on Dodworth Road.

He added: "I went up in my van but couldn't get anywhere near.

"The driver had already been taken to hospital but a police officer told me he'd said the brakes had failed and that he'd not been happy with the vehicle when he set off."