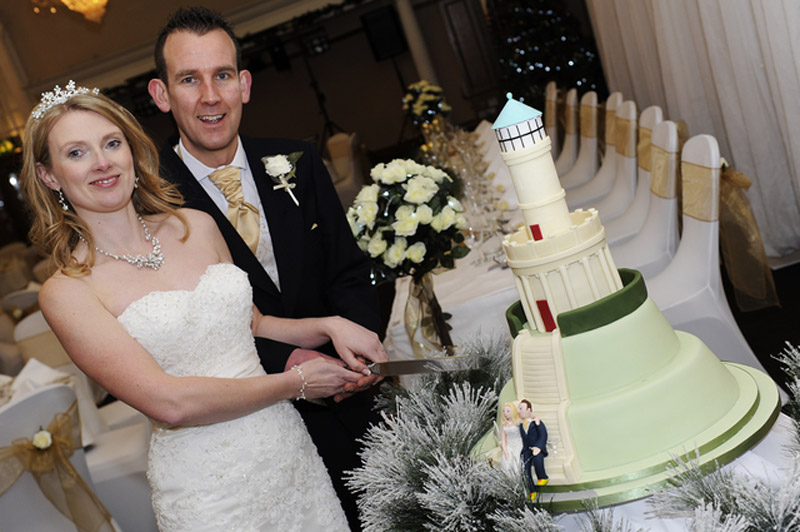 Tower Turned Into A Cake In Honour Of Couple's Meeting Place

A COUPLE who met when they 'ran into each other' in Locke Park had a wedding cake sculpted into the shape of the park's tower when they tied the knot!

Lee Mitchell, 38, of Norman Close, Worsbrough, met Zoe Tolman, 34, at the Locke Park 5k run which is held every Saturday at 9am.

"It was a particularly cold December morning, and I just took a bit of shelter in an alcove by the cafe in the park waiting for the run to start," Zoe said.

"We just got chatting. We're both in different running clubs, but we kept bumping into each other at different events, and a few runs at Locke Park.

"It wasn't long at all before we knew something was brewing.

"We'd go for a coffee after the run, but on one Saturday the coffee lasted pretty much all day.

"We just really hit it off."

That was three years ago and they have done the park run about 30 times since. They also ran the London Marathon last year.

Their wedding cake proved to be quite a talking point.

"It was a lady in Scarborough who made it, so we hadn't seen it until the day," Zoe added.

"People just went absolutely wild for it. It was beautiful."

Locke Park Tower is not usually open to the public but the Friends of Locke Park group agreed to open it up especially for Lee and Zoe, so they could have some extra photographs taken.

They even put their trainers on and had an extra run around it in their wedding attire!